Want to stay a Millionaire? 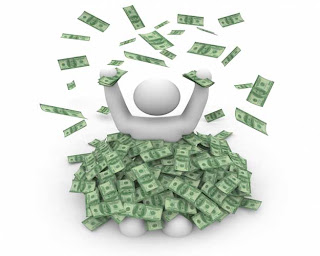 "If you want to be a millionaire, start with a billion dollars and launch a new airline" - Richard Branson (Virgin carrier CEO)

Richard Branson's famous joke may seem prophetic to Vijay Mallya of Kingfisher Airlines, who is more or less facing the same situation and the heat of bad economics of owning an airline. However the objective of this article is not to poke fun at the airline industry or discuss its bad economics. I read an interesting piece in another blog which showed another method to lose your money fast - lock it up in your locker and sit tight! Yes, if you do nothing about your money, you can ensure that you would experience a steady decline in your living standards. To illustrate this, just check out this table which was published by Daily Mail,a London newspaper.
This table shows what it did cost to live like a millionaire in the year 1992 and what it would cost to live like a millionaire in 2012, twenty years later. 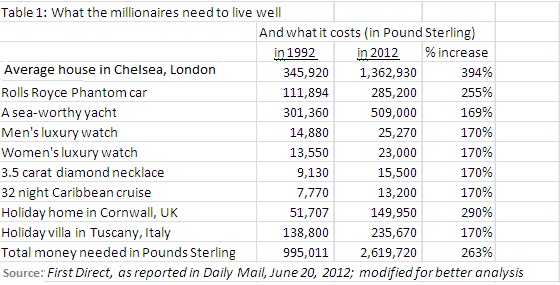 In 1992, the article explained, a millionaire needed to live in a nice part of London (Chelsea); own a great Rolls Royce car and a yacht; diamonds; own a few holiday homes with the ability to head out on a 32-night cruise in the Caribbean. The total cost for that would have been Pound Sterling (GBP) 995,011. 20 years later in 2012, the same consumption would cost the millionaire GBP 2,619,720 - an increase of 263% over 20 years. Had the millionaire not invested properly, chances are that the millionaire would be living in self imposed 'austerity'. Basically, to live like a millionaire did in 1992, you would need to be a "2.6x" millionaire.

While the rich have an interesting problem of owning multiple properties and spending 32-nights on a cruise ship, most people have to find ways to meet their basic needs on a daily basis. The point that I was trying to bring out is that it costs more money today to enjoy our consumption basket than it did 20 years ago. The value of paper money is shrinking with each passing day. When currencies like Pound Sterling have have lost so much value in 20 years, I need not mention about currencies like the INR.

However I would like to point out an interesting finding: What if the millionaire had used gold to enjoy his "consumption basket" in 1992? How many ounces of gold would he have needed in 1992 and in 2012? The finding is actually quite surprising. To enjoy the "consumption basket" in 1992 the person in London would have needed 5,077 ounces of gold (about 143.93 kg of gold) while in 2012, he would have needed just 2497 ounces of gold (about 70.789 kg of gold)!!! That is a full 51% lower gold than he would have need 20 years ago! As explained in my previous articles on Gold, gold is a storehouse of value and the case for gold is clearly illustrated by this 'millionaire lifestyle' case.