Markets on a Roll: Time to Invest? 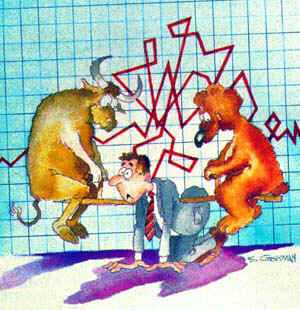 'Nifty to touch 5800!', 'Nifty holding strong: Time to raise equity allocations!' - These are two headlines that appeared a day back in a couple of leading financial dailies. All of a sudden, everyone is upbeat again! And there is good reason to be so. The Sensex and Nifty has been on a dream run after posting 7 straight weeks of gains! Once again it seems as though people are becoming bullish on equities. I must be honest, this rally has done me good and my stocks have gained quite a lot after being hammered a few months back. However this rally has me uneasy as well.
But the 'experts' on television as always have all the reasons as to 'why this rally had to happen!' The reasons given by them are lower inflation, rate cuts and a recovering rupee . These reasons are of course good signs for the Indian economy but does it justify the huge gains Nifty has made in the last few weeks?

Last month, I had written an article on the January Effect and why stocks tend to rally around this time of the year. But even the January effect doesn't explain the rally seen in some stocks. For instance, stocks like HDIL, Orbit, Lanco Infra, IVRCL, which were amongst the most beaten down stocks in 2011, have given over 100% returns since the beginning of the year. Have the fundamentals changed for these stocks in the last 2 months? No! But yet these stocks have doubled in price.
The only reason why the markets have risen over 18% in 2 months is the unprecedented USD 4.4 billion in foreign flows that have come in since the year began. This rally is a global rally and one can't really attribute any Indian reasons to it! The Central Banks around the world have injected liquidity into the world economy and some of it has found its way to the Indian markets! This is a global liquidity rally and whenever that ends, the markets will start reversing. An important point to note would be that domestic institutions have been selling in this rally, all the more reason for it to fizzle out when liquidity dries up.
The economic outlook still doesn't seem all bright as shown by the disappointing results by most companies and the Euro zone crisis is far from over, in spite of new loans being approved for Greece. Everyone knows that new loans will not resolve the Greek crisis but the loans have been made coz in the short term, Greece defaulting on its payments could wreck havoc in the world.
In the midst of celebrations due to this rally,  this article may come as a dampener but I only seek to ask my readers to exercise caution and not jump into this rally without thinking. If you are a trader, you can consider participating in this rally at your own risk or trade against this rally. I am not much of a trader and have found more success following a value investing approach in fundamentally sound companies and holding them for longer periods of time. Whether you trade or invest, remember what Keynes had to say about the markets - 'The markets can remain irrational longer than you can remain solvent'.
Posted by Rahul George at 10:25 PM